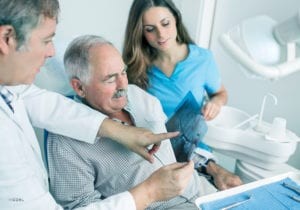 Many of the patients our doctors see have questions about sedation dentistry in Glendale, and that is not a surprise to them at all, as one in five people, or twenty percent, of all people, say that they have a fear of going to the dentist. In short, it is one of the most common fears for people to have in the entire world.

Even though we take it for granted that many people are scared of going to the dentist, and when they do go, they receive sedation dentistry, we rarely examine why people are actually scared of going to the dentist in the first place. With that in mind as a starting point, let us actually take a moment to examine this question in more detail and get to the root of the matter and how sedation dentistry can help.

People are Afraid of Feeling Pain

Sometimes the answer to a question can be right in front of our faces, and, at least in part, this answer ends up being a relatively obvious one. Glendale patients are afraid of pain for a perfectly good reason, and that would be because, well, it hurts. However, what many people often fail to take into account is how advanced modern dentistry is right now with sedation dentistry.

People may think the pain of undergoing a procedure will be worse than the pain that they currently feel in their mouth, but this is often not the case. In fact, with tools on hand, such as sedation dentistry in Glendale, many dentists, including our doctors, have found ways to make going to the dentist a procedure that actually involves very minimal pain.

People Do Not Like Feeling Out of Control of Themselves

This is one of the reasons that is far more rooted in human psychology, and therefore does not get brought up nearly as much, even though it very much should. Going to the dentist is often a confining experience for many people, as they are forced to sit in a chair and are unable to move for long periods of time, which as one could imagine, is highly uncomfortable.

There is also a far more primordial response here as well. Often times, even during a simple cleaning, a patient’s breathing patterns may change. Obviously, the body does not like this feeling, as it needs air to continue to be able to function. Subconsciously, many people associate going to the dentist with a feeling of claustrophobia which they were not even aware of.

People Have Had Prior Bad Experiences With Their Dentist

Part of the reason that humans have survived as long as we have, as a species, is that we have learned, to an extent, not to keep repeating the same mistakes over and over again. If going to the dentist was a traumatic experience for someone, especially as a child, they are more likely not to want to visit the dentist as an adult.

For more information about sedation dentistry in Pasadena, please contact our doctors at (818) 208-5800.

« Common Myths About Sedation Dentistry Debunked How Do Dental Implants Preserve the Jawbone? »